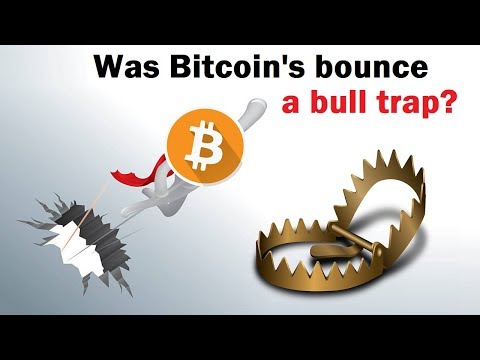 Today we saw another sustained move up in the cryptocurrency space. Optimism is increasing across the board, and it makes me sick. It makes me sick because I believe investors are not aware of the risk, and may be getting suckered into a bad trade.
Bitcoin made several attempts to push lower, but these attempts failed to attract any longer term selling. They were in effect just margin stop runs that failed to continue. That means that in order to push lower the market must attract new buyers that will sell when Bitcoin decides to start its next move down.
Why am I so sure that it's a bull trap and not just an influx of new investors that could start a new bull run? The answer lies in on chain transaction value. Bitcoin use and adoption has decreased substantially. This is readily apparent in looking at on chain transaction value. When we look at the history of on chain transaction value compared to price we quickly see that Bitcoin is already overvalued. At $9500 we would be reading the most overvalued levels Bitcoin has ever had indicating an imminent crash. The last time I saw things at this level was before the December crash.
The only question is how alts will respond. How far can Bitcoin Cash move up during this bull trap, and will it respond the way it did in February when Bitcoin is falling? It could be a positive setup for an eventual flippening.
As is usually the case for my predictions of this nature there will be many people that don't want to hear it. I'm not doing it for the Karma or tips. There is a good chance this just gets downvoted and never seen. I only post these so that I have a well established history of my major calls to point back to.

Seven months ago I posted a prediction to this subreddit. You can read the original post at the link below. It did fairly well, but apparently not well enough.
https://www.reddit.com/btc/comments/8dpje8/beware_the_bitcoin_bull_trap/
I also post notes daily on Patreon. Subscribers get the notes daily, and the public can see the posts three days later. I post valuation charts and my reading of order flow.
Https://Patreon.com/speculatorseth
For the past seven months I have been patiently waiting for price to return to reasonable valuations. When I first made my call it said we could see $4k. It currently says we could see $2k.
I originally posted to establish a record. I have a monetary theory of cryptocurrency value that is extremely predictive of price. Using the blockchain for legitimate commerce is what creates value. You can measure this through estimated transaction value. I am trying to prove this theory to you by posting accurate predictions.
The era of Bitcoin price being based largely on speculation needs to end. It is destroying people's money, and it is holding crypto's back from realizing their full potential. The constant bottom fishing in the market only makes things worse. There needs to be a fundamental reason for buyers to step in. That can't happen if the market doesn't understand value in the first place. So I urge yout to share this information. Bitcoin price must be backed up with transaction value.

25 days ago I warned that Bitcoin prices above $9,500 were unsustainable.
https://www.reddit.com/btc/comments/8dpje8/beware_the_bitcoin_bull_trap
21 days ago I sold all of my holdings near the specified price target.https://www.reddit.com/btc/comments/8enqq7/sold_everything
Since that time Bitcoin has sold off significantly. As I write this Bitcoin is selling to $8,000.
My calls are based on a valuation model that I post every day to subscribers on my Patreon: https://www.patreon.com/SpeculatorSeth
The valuation model is extremely predictive of tops and bottoms. I honestly didn't believe it myself, but since I created the model it has successfully predicted four major pivots on the daily charts. The incredible success has led me to call my model "the golden goose". I was planning on posting a victory tour of sorts once it was clear to everyone that we are in a down trend. I really wanted to rub it in everyone's faces. However, I did not expect such quick flushes lower. At this point it is hard for me to find any joy in being right.
My model is currently projecting the bottom at around $3,000. This move may take up to 6 months to occur, but it may be faster as someone big is definitely panic selling. Think of my targets as Bollinger Bands that adjust as we get closer to them. So we will have to watch the lower band as we continue to drop. It could be a little lower, and it could be a little higher. It all depends on the transactions on the blockchain.
Why am I posting this? As you can probably guess I do use the money I get from sharing the indicator to invest back into Bitcoin. It's unfortunate that I discovered the model when it was already too late to catch last year's bull, but I have made money from the bounce we got between $6,000 and $10,000. You better bet I'm saving up so I have a big wad of cash to throw at this when my indicator says we're oversold again. I also feel a responsibility to warn people. I've had traders tell me that my call saved them thousands of dollars. Maybe I don't make money from that, but I think it's worth it.
But there is a larger trade here as well. Bitcoin's value depends on the transactions happening on the block chain. If there isn't enough money being transacted on the chain to back up the current value then a crash becomes inevitable. There simply isn't enough buyers to sustain it. It is the transactions that gives Bitcoin value. With that knowledge the market can invest based on fundamental information instead of just pure speculation. That means that some day we won't get these bubbles and brutal bear markets. Instead price will move based on economic cycles, and how those cycles affect the amount of money transacted on the blockchain. Such stability makes Bitcoin more valuable, and ultimately increases the value of my own investment.
If you want to follow the model day by day subscribe to the patreon. Hopefully next time I make a post like this it will be after better markets.

Die Bullenfalle (englisch Bull Trap) ist ein Begriff aus der technischen Analyse und bezeichnet ein falsches Kaufsignal. Die Bullen, diejenigen die auf steigende Kurse setzten, tappten in die Falle und müssen Verluste verbuchen, weil sich der Trend gewendet hat. As observed from the chart, between 27 July and 1 August, Bitcoin’s price and trading volume followed a bearish divergence which may have led to a bullish trap at the top. Therefore, it is highly possible that the sell-off at $12,000 was due to this bull-trap. With the price consolidating at the moment, the market is still fairly bullish. Bitcoin is attempting to break out of its weeks-long pattern of consolidation as traders try to push it in the direction of the US stock market. The benchmark cryptocurrency surged 2.96 percent to $9,343.31 on Monday. Biggest Bitcoin Bull Trap In The Making April 23, 2020 By Jefe Caan. Share with your friends . Wechat Breaking News / Bitcoin / Analytics / BTCUSD. The price of Bitcoin has seen some minor retracements here and there but it seems ready to shoot towards $8k and potentially higher than that towards $8.4k-$9k to fill the CME Futures gap in the wake of Bitcoin halving. We would once again see a ... Contrary to a bear trap, a bull trap is designed to make people believe the value of a tradeable asset will increase spectacularly. Looking at the Bitcoin price chart over the past few days, it is evident the $2,700 mark was a major bull trap. With the BTC price rising so steadily, a lot of people thought there would be no way to stop the momentum. Forward to today, and Bitcoin is barely ...

Discover the latest technical analysis for Bitcoin. Is this a bull trap from the bitcoin market news and technical data ? Check out my main channel: I show you where bitcoin will top out before we drop.. I break it down with simple math, longs, fib retracements and I even break out the 200MA. The trap is set! Bulls are about to become whale ... Now we are Available on All this Platform to Follow us on All this Platform for Instant Update :) ️Open Your Binance with this link : https://www.binance.co... Is the Bitcoin (BTC) price potentially forming a bull dip or a bull trap, in my opinion?! Let's discuss this live today and some cryptocurrency trading technical analysis (TA) + speculative price ... Yes, I am back and this year has launched better than expected here at Goonalerts. Jan-Feb over 500% in gains and last but not least March closing in at over...